Effects Of Mixing Drugs - Polydrug Use

Mixing drugs is also known as polydrug use. It occurs when two or more drugs are used at, or near, the same time.  Mixing drugs is dangerous and the effect can be unpredictable.

Severe side-effects associated with taking higher doses of drugs are more likely to be experienced when mixing drugs. Especially when drugs of unknown content and purity are mixed. This includes mixing alcohol, pharmaceuticals and illegal drugs.

Mixing drugs can lead to:

Below is some examples of side-effects of mixing drug types.

Mixing alcohol and amphetamines can have dangerous masking effects. This can result in much larger amounts of both drugs being used without the person realising. This can increase the risk of overdose or poisoning.

See the Amphetamines and other drugs page for more information on the effects of mixing drugs.

See the Ecstasy and other drugs page for more information on the effects of mixing drugs.

Mixing alcohol with either opioids (including heroin and codeine) or benzodiazepines can depress the heart rate and breathing, leading to loss of consciousness, risk of choking on vomit and fluids and death.

See the Heroin and other drugs page for more information on the effects of mixing drugs. 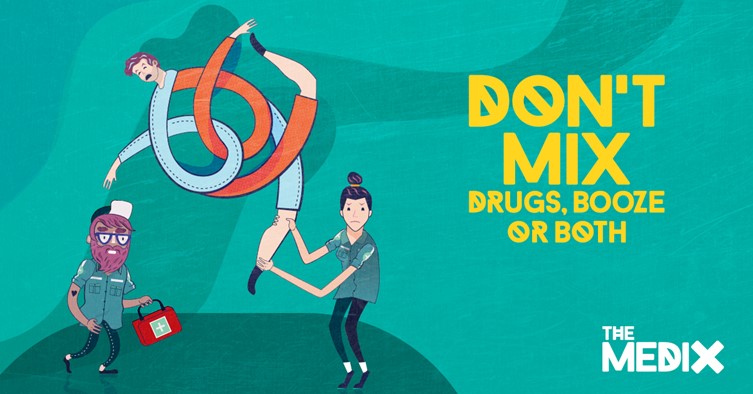