In an emergency call 000
FAQs

What are you getting into?

Drugs alter a person’s mood, thinking and behaviour. People take them for a range of reasons and the effects vary from person to person.

A drug is any substance (with the exception of food and water) which, when taken into the body, alters the body’s function either physically and/or psychologically. Drugs may be legal (e.g. alcohol, caffeine and tobacco) or illegal (e.g. cannabis, ecstasy, cocaine and heroin).

What is a psychoactive drug?

The experience that a person has when using other drugs will be affected by their individual characteristics, the drug and the environment or place. 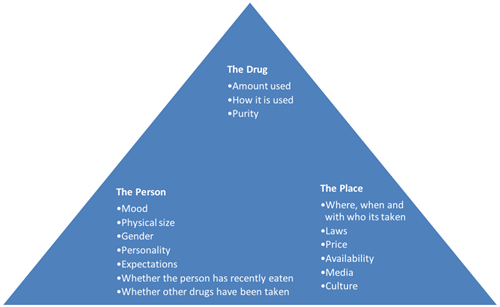 Why do people use?

Tips for telling people that you don't want to use drugs

The purpose of this section is to provide suitable strategies and tools to equip young people with the appropriate skills to successfully refuse drugs in various situations they may face as a teenager and young adult. These situations may differ based on the age of the individual or stage of life. This page focuses on the fact that most Australians do not use drugs and you are not alone in refusing them, however if you come into a situation where this is required, you are equipped to do so.

The majority of young people in Australia do not take drugs. Friends, parents, older brothers and sisters and the media can also have some influence over a young person's decision to use drugs.

When you may need to use drug refusal strategies:

Sometimes we are put in situations where we want to say no but feel pressured or embarrassed to say otherwise. There are a few options when it comes to refusing drugs to refute feelings of awkwardness or embarrassment.

The first example of saying no to drugs aimed at young people and teenagers. Saying no to drugs as a teenager can be very different to refusing drugs as an adult. So we have devised a few different scenarios that cater towards different ages and stages of life to ensure you are the best prepared possible and have the skills required to say no.

Challenges of saying you don’t want to use drugs:

In Western Australia 16.8% of people aged 14 years or older used an illicit drug or misused a pharmaceutical in 2016.

In comparison, Alcohol was used recently by 75% of people 14 years or older.

The main types of drugs used in Western Australia in 2016 were:

# Used for non-medical purposes. Excluding over the counter pharmaceuticals.

* Estimate has a relative standard error of 25% to 50% and should be used with caution.